Choking is common among toddlers and is usually caused by food, toys and other small objects that get stuck in a child’s windpipe.

A UAE hospital recently reported an increase in cases of children swallowing chemicals and small electronic objects. Emirates Health Services (EHS) said Al Qassimi Women’s and Children’s Hospital admitted more than 50 children in one year, some of whom sustained severe damage to their digestive systems.

The hospital said the most common objects swallowed by children are batteries, magnets, nails and chicken bones, which experts have warned can cause serious harm.

He explained that approximately 80 per cent of paediatric foreign body aspiration episodes occur in children younger than three years, with the peak incidence between one- and two-year-olds. This is because they have the fine motor skills to put a small object into their mouths, but they do not yet have molars to chew food adequately and may have uncoordinated or immature swallowing mechanisms and smaller airways diameter.

“Foreign body aspiration is potentially life threatening because it can block respiration, thereby impairing oxygenation and ventilation,” explained Dr Alshoman. “Also, can cause morbidity due to the acute hypoxia, and can cause chronic airway damage, lung infections, abnormal breathing sounds from long standing aspirated foreign body.”

Nazer Olakara, President, Child Protection Team, UAE, says children under four face the highest risk of getting food stuck in their throats. “Foods get stuck in their throat due to carelessness and fast eating,” he said. “There are also situations where young children are at risk for not knowing how to chew food properly.” .”

Olakara explains than swallowing food and eating too fast can cause food to get stuck in the throat in children.

Children may have some symptoms if the small bronchus of the lungs has been blocked for some time, he added. “Symptoms may include persistent cough and pneumonia.”

If food gets stuck in a child’s throat, the following symptoms may appear: 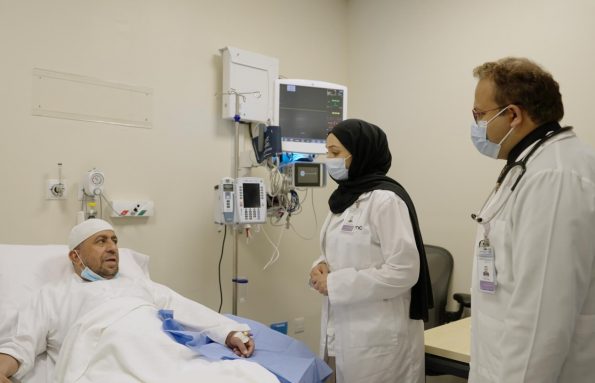 Consultant and vice-chair of the Division of Hematology & Oncology, Dr. Mustaqeem Siddiqui, elaborates on the need for measures to protect immunocompromised patients.